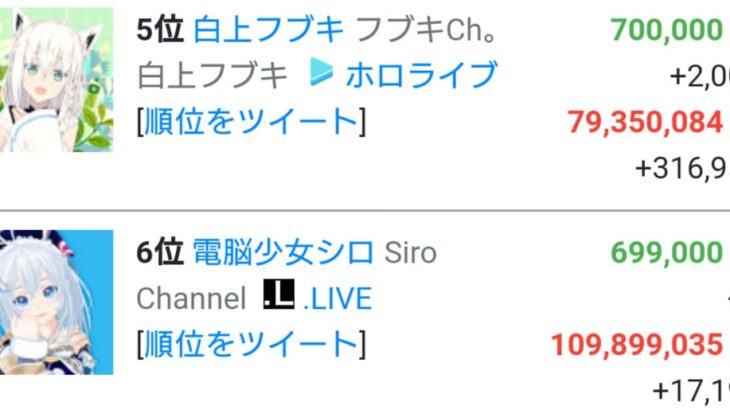 As of 2:00 AM on July 15 (JST), the number of YouTube subscribers (approximate number) of Virtual YouTuber (VTuber) Shirakami Fubuki (Affiliation: hololive Production / hololive) has reached approximately 690,916, and Cyber Girl Siro (Affiliation: Appland / .LIVE) was temporarily exceeded by about 690,000.

Furthermore, as of 15:00 PM, it has been confirmed that it has reached approximately 700,000 peoples. The number of subscribers to Shirakami Fubuki officially surpassed Cyber Girl Siro.

Cyber Girl Siro is a part of the former “Big 4” (Kizuna AI / Kaguya Luna / Mirai Akari / Cyber Girl Shiro/ * “Nekomasu” retired) that supported the early days of the VTuber movement. This event marks the end of the era when the former “Big 4” 4 people, who had continued for nearly two and a half years, monopolized the number of registrants for the first time.

Former “Big 4” such as Kizuna AI, has acquired enough registrants that it will be extremely difficult for later generations to overtake due to the momentum of the VTuber movement that began at the end of 2017.

In the future, we will focus on hololive and NIJISANJI’s VTuber as a new goal for this time Shirakami Fubuki (not only the number of views and the number of connections that already overwhelm Big 4, but also the number of subscribers to the channel) It is expected that there will be a trend toward breakthroughs.

Next Stage – From VTuber to “YouTuber”

It is expected the end of this Big 4 regime will be the first step for new generations such as hololive and NIJISANJI, whose main focus is live streaming, to surpass the framework of “VTuber”.

Up until now, new generations such as hololive and NIJISANJI have remained topical within the framework of the limited and enthusiastic VTuber viewers. However, as a result of this event, they gained the confidence as the first step to expand from the scale of “VTuber” up to now as more of “YouTuber”. In the future, it will be possible for us to become more enthusiastic about the media exposure and social responsibility as a new main player of the VTuber movement by increasing awareness among the general public. Just as Big 4 disappeared due to operational problems, new generations such as hololive and NIJISANJI will also be in a position to give serious eyes and evaluations in the future. They have to build on an operating system that is supported by as many people as possible, taking into account the various operational problems that have been highlighted in the past.