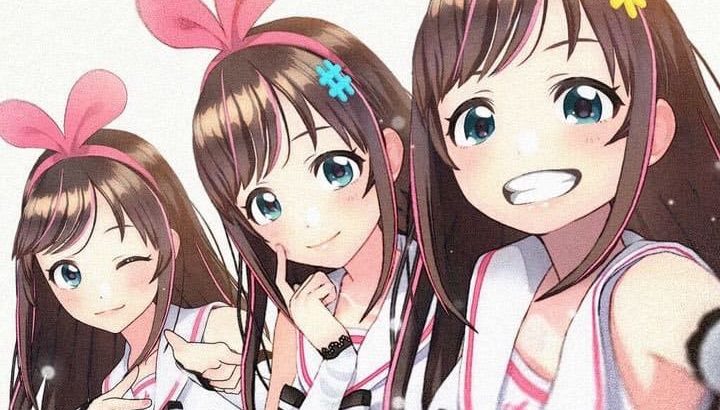 Kizuna AI, who was once a symbol of virtual YouTuber (VTuber), retired from the front line due to various problems surrounding the so-called “Division”, and since then, frequently released videos featuring the “Division” versions together.

Her producer Activ8 may be mistaken for this as a “Breakthrough” and “Interesting” thing. There may be circumstances where not only the Voice Model “Division” but also physically “Clone Division”, and as a substitute for the collaboration destination lost due to a series of problems, it is possible to show a skit between the “Division” versions.

However, many of the former viewers who were separated due to the “Division” problem felt “Feeling Uncomfortable” with the aggressive development of the “Clone Division”, makes a statement that completely limits Kizuna AI.

It is thought that it is not only the voice model “Division” that changed the current Kizuna AI into something “Eerie”, but the physical 3DCG model “Clone Division”.

The # version shows a flattering face, and * version shows a lively expression. The character is “Another Clone” even though they all have the same Kizuna AI. And the fact that many of the viewers decided they were “FAKE” is due to the fact the number of playbacks of these “Clone Division” videos was low as before.

Other VTubers are vigorously expanding their range of activities by vigorously taking in “Stay Home Demand” affected by the New Coronavirus Infectious Disease (Wuhan pneumonia / COVID-19) and making a breakthrough. However, Kizuna AI still has a low number of views.

“As long as they have the same name and shape, you may change the part that forms the core of character.” This kind of social experiment was answered by many consumers in the 2010 “Idolmaster 9.18 Incident”.

It’s an excuse for parallel worlds, showing off behaviors that are very incompatible with the same names and characters. The more enthusiastic core fans, the more disappointed they were, and the weirdest puppet play that seemed to be enjoyed by putting in and out of their personality, they were sick and disgusting.

As a result, the first generation Idol Master disappeared from the front line of the content industry. It is now a dead body.

The situation in which Kizuna AI is currently being put into is just that kind of “uncertain”. Each of the “Clone Division” versions personally and physically plays the character “Kizuna AI” of “Another Clone”, the more they play, the more they act as if they accumulate negative emotions from the bottom of their chest, and at the end can feel negative emotions just by hearing Kizuna AI’s appearance and the voice of “Division” version. It turns the viewers who were thinking about the future into “Indifference” by the “Division” problem, and it is becoming a reality.

As a result, there may be a lot of people who think “I’m no longer interested in Kizuna AI” regardless of the existence of the Original Voice Model. This is a tendency that has been seen before it became clear that the original version of the voice model has left the company’s office, and it seems that this tendency has become even stronger thereafter.

Even the viewers who have believed in it until the end are leaving.

Maybe… a further “Division” version has been added, or has already been added, without notice, and “Another Clone” or “Fake” is playing the video or live broadcast…

Peoples can no longer believe in the present Kizuna AI, which is always accompanied by such “Disbelief,” “Suspicion,” and “Suspect”.

Beyond the Lonely March

Activ8 seems to be firmly promoting a series of routes in Kizuna AI.

Questioner: I think recently, there are virtual YouTubers who speak English. Kizuna AI originally spoke in Japanese but now she speaks Chinese, too. Are you planning to increase the number of multilingual characters in the future?

Osaka: Yes, I think we should increase them. Originally, there is the concept of wanting to connect with everyone, and the format is called virtual talent, which, overseas fans call virtual beings, and I think this is because there are no technological limits. I strongly feel that there is a meaning to virtual talents breaking boundaries. I think that the virtual streamers are also largely significant because we gave avatars to people, who do not want to show their faces but want to create and transmit their own content. It is wonderful in this sense. Kizuna AI shows that there is no limit to human beings, that there is no limit to technology produced by human beings, and that the future is infinite; that is why I produce such content. That’s the source of my passion. There is a language barrier in connecting with people from overseas and there is no specific method to resolve this, but I think it is necessary to optimize the language of the content for that region. Of course, if there is are methods to connect in ways other than language, we will definitely use that method.

It has already lost a lot of viewers, new videos are sluggish, SNS transmission is not widespread, its presence in the whole VTuber industry is becoming invisible, but it will be rewarded at the end of the tunnel at the end Is it a tragic “preparation” to believe and continue this lonely march? Or is it still a “Sluggish” that they are still far ahead of the viewers who put no on the “Division” route?

Crypton Future Media, which has Hatsune Miku that has now gained worldwide support, is looking forward to the “coming of the age of CGM (Consumer-Generated Media)” and is a modest listener who always listens to the voices of fans. As a result of searching for a direction with such a stance, it has brought about changes in various fields that go beyond just pursuing in-house profits. The company is still humbly looking for a direction, such as strengthening closer contact with the local area Hokkaido.

Kizuna AI had potential to become something like Hatsune Miku. However, the road is now cut off, and the people who have longed for it have left, leaving for the Lone March between “Clones”.

Is this march “Hell”? Or is it the way to “Paradise”? Kizuna AI walks alone again today.