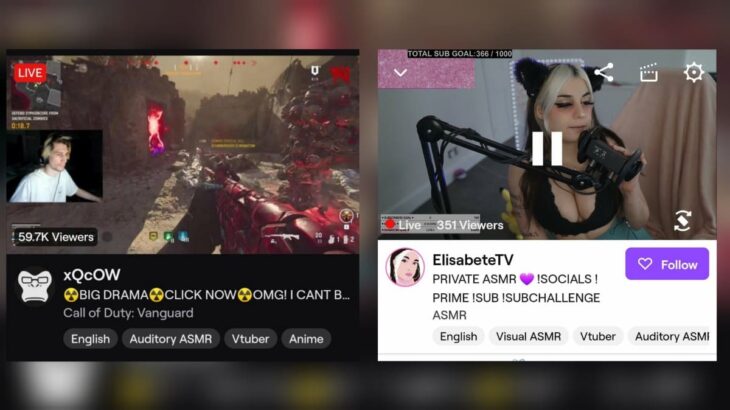 This time, it turned out that some streamers who are active on Twitch are not Virtual YouTuber (VTuber), but there is a situation where it is regarded as a problem because they are abusing the tag of “VTuber”.

As of April 2022, the existence of “Some streamers who are not VTuber” who intentionally abuse VTuber tag on Twitch has emerged as a serious problem. Furthermore, it seems that well-known streamers are also listed in them, and it has become a problem mainly in the VTuber community outside Japan because the VTuber tag for searching for VTuber distribution is malfunctioning. We are here.

A well-known Twitch streamer who has been pointed out to be abusing VTuber tag has been confirmed to be “xQc (Félix Lengyel / number of followers: about 10.43 million)”.

There is a view that the purpose of abuse of VTuber tags by some Twitch streamers is to gain the number of viewers. In addition, some of these streamers are doing ASMR distribution that is not suitable for viewing by minors, and making nuances that may be regarded as derogatory toward VTuber also strengthens the opposition from the VTuber community. It is thought to be the cause.

This situation has already been mentioned as a serious problem mainly by VTuber talents outside Japan, but it seems that it is not widely recognized as a conspicuous problem in Japan. In the future, I hope that the problem will be resolved, such as taking concrete measures on the Twitch side.