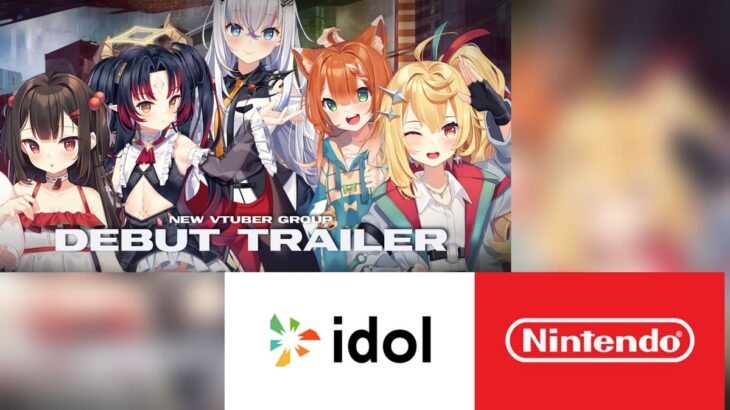 Idol Corporation is scheduled to debut as a Virtual YouTuber (VTuber) from Israel on March 10, 2022 “Kattarina Qutie“, “Neo Sparkles“, “Lily Sin”, “Nikki Rei” and “Emi Suika” announced that Nintendo will participate in the debut streaming sponsorship.

Were excited to announce Nintendo has sponsored our debut streams. As part of this cooperation, you might be able to win Nintendo Switch consoles and unique prizes. Stay tuned for more information! Thank you TorGaming LTD for this wonderful opportunity!

5 VTubers from Israel Debut on May 10

The following 5 VTubers from Israel will make their debut with the support of Nintendo and others. Initially, 4 talents were planned, but it seems that one person has increased.

Being the head of a feared international mafia organization, Qutie has her wits and grits always prepared when making deals with ‘underground’ business, conducting official ‘transactions’, and fighting for influence and stronghold of mafia areas. Despite her strong character, she still finds solace in playing video games. Just like how she aces her way into the video games she play, she also aces in her leadership that no one can stop!

Despite residing in a perfect-picture fantasy world, Sparkles’ persona exudes the energy of a fierce soul, as having lived through an RPG-inspired world where countless lines of story woven have shaped her perception of how she sees the world. A half-human, half-fox personality; she exudes a hybrid of a blissful innocent appearance, only to be followed with a persona that you don’t want to mess with fully.

A horror-stricken soul pulled from the popular horror genre, Lily Sin’s persona revolves around her promise to haunt those who dare visit her castle, as well as avenging the tragedy that took her parents away. As part of her, she made a deal with the devil to avenge the tragedy, and let others feel the horror she has witnessed for so long.

Living through thick and thin in spite of a failing world after an unpredicted apocalypse, Rei’s everyday life with her dog has always been muddled with skirmishes with a lot of untrustworthy people, all doing their best to keep afoot such difficult times. Despite the hardships, a mix of rage and hope flows through her persona to always keep pushing forward…

Your bubbly companion whenever you need, Emi is your bundle of joy, offering you her favorite thing in the world: watermelons. Aside from that cuteness, who could even resist her bunny plushie? Might as well get comfy around her, just like her persona that exudes!