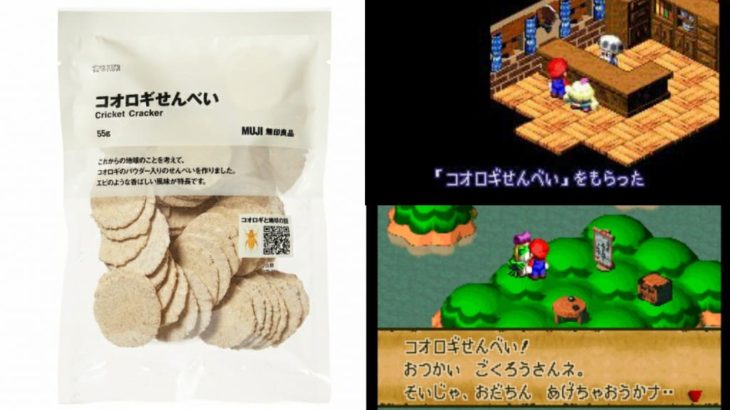 Ryohin Keikaku (plan to manage MUJI) was released on May 13th, and the new product “Cricket Cracker” was pre-released on May 20th at the company’s net store.

This “Cricket Cracker” has been talked about as having the same name as the item that appeared in Nintendo’s game software “Super Mario RPG“.

MUJI’s “Cricket Cracker” uses a tropical cricket called “Gryllus bimaculatus” bred based on research at Tokushima University. It is said that it is bred in a hygienic and safe environment and that it can lay eggs year-round by keeping the temperature and humidity constant and that it can produce the amount used for food. In addition, crickets are made into a powder form and kneaded into a rice cracker so that they can be eaten deliciously. In order to utilize the taste of crickets, a simple mixture is used without using extra raw materials, and you can enjoy the fragrant flavor close to shrimp.

“Super Mario RPG” is the software for SNES released in 1996 and is Mario’s First Role-Playing Game. The topic was gathered as a co-development by Nintendo and Square (currently Square Enix), a TV commercial with a light singing voice by Pack’n Flower, and “A coupon ticket that makes SNES 4,000 yen cheaper”.

“Cricket Cracker” in this work appeared as a favorite of “Frog Hermit”. Since this item was known to many as an important item in the progress of the game, “Cricket Cracker” released by MUJI this time was “The item of Super Mario RPG has become a reality” “Nostalgia” There is a voice.