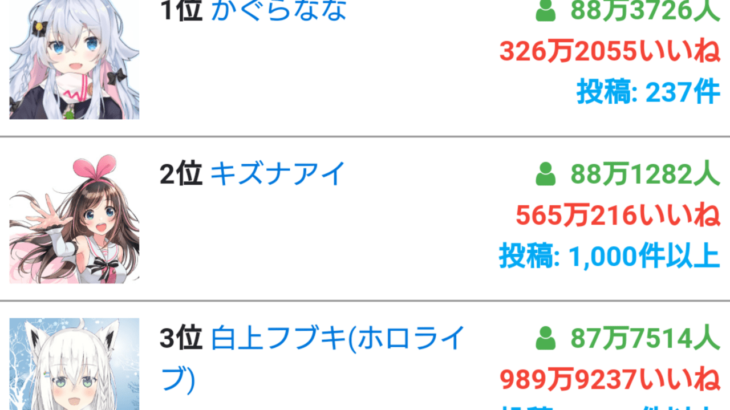 This time, Kizuna AI (キズナアイ) has dropped from No.1 to No.2 on the Virtual YouTuber (VTuber) official Channels for the Chinese Video Platform “bilibili (哔哩哔哩)”.

The new No.1 is “Kagra Nana (カグラナナ)”, a member of the artist management production “INCS toenter”, which has supercell, kz (livetune), and HachiojiP.

Kagura NaNa is a VTuber who is also active as the illustrator “Nana Kagura (ななかぐら)”. Mainly released “Utattemita (Karaoke／Tried to sing)”. She is also responsible for character design for “Hyakki Ayame (百鬼あやめ),” a member of hololive Production.

The number of followers for Kagura NaNa is likely to reach the million mark that Kizuna AI missed just before.

On the other hand, Kizuna AI, who dropped to second place, criticized Chinese Kizuna Ai fans on bilibili in August 2019 for suspected of “Kyoto Animation Arson Murder Case” or said Taiwan is Chinese territory “Political Remarks” have lost the support of many who avoid political topics. The number of subscribers, which was close to 1 million at the beginning, has temporarily dropped to minus 200 thousand, and it is thought that this “Top Change” has also had a major impact.

In No.3, “Shirakami Fubuki” of hololive Production is closely approaching Kizuna AI, and there is a possibility further changes in rankings may occur in the future.