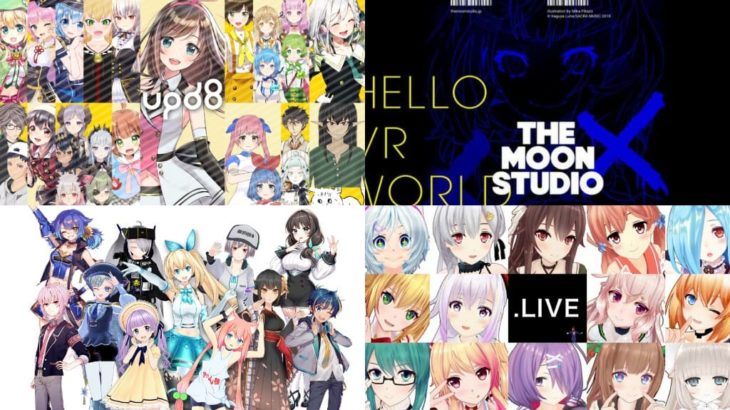 upd8 is a VTuber support project group established by Activ8 on May 31, 2018. Kizuna AI, which was at its peak at the time, was the leading group, and it was the largest group in the industry.

But, that was only a moment. Soon, hololive Production and NIJISANJI made a breakthrough, and many of VTubers that they belong to were stagnant. After the summer of 2019, so-called Kizuna AI’s “Voice Model Division” and “Clone Division” problems cast a shadow, and upd8 rapidly lost its presence in the VTuber industry.

On April 30, it was announced that Kizuna AI (who has been the leader until then), and 774inc produced “Tea House Animale” “HoneyStrap” have left. As a result, upd8 with Kizuna AI as the leader disappeared.

THE MOON STUDIO is a creative studio group founded in November 2018 and belongs to Kaguya Luna and Pinky Pop Hepburn. Dissolved in September 2019.

ENTUM is a VTuber management office operated by ZIZAI (formerly DUO) and was established in April 2018. A unique VTuber with excellent technology, with Mirai Akari as the lead, belonged to it, but it ended at the end of 2019.

.LIVE is a VTuber office operated by Appland, led by Cyber Girl Siro. The junior class “Idol Club” and so on belong. As of May 2020, it has not been dissolved or reduced in activity, but due to problems such as the stall of Siro and problems surrounding the Idol Club, it has been forced into a severe situation and has already disappeared from the first line.

With the withdrawal of upd8 this time, virtually all of the former “Shitenno / Big 4” group will disappear from the front stage of the VTuber industry. Originally, the outlook for 2020 was predicted to be very severe, but the mainstream of hololive Production and NIJISANJI combined with the effects of the New Coronavirus Infection (Wuhan Pneumonia / COVID-19), It may have resulted.

On the other hand, hololive Production and NIJISANJI offices, which mainly have live broadcast distribution styles, made a huge leap in the last year, but this year they recorded even more due to the “Stay Home Demand” due to the “Corona Shock”, continues to make great strides.

While the former “Shitenno / Big 4” group has disappeared, horolive Production and NIJISANJI, will continue to grow for the time being. It may symbolize the end of the Kizuna AI era.