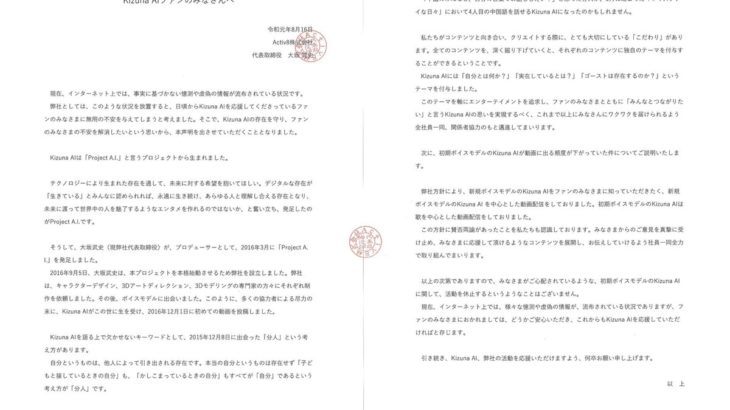 Mr. Osaka had announced he had encountered the concept of “Division” based on multiple voice models led to the so-called “Bunjin (Multiple personality)” of Kizuna AI on “December 8, 2015 (before Kizuna AI was born)”.

On the other hand, President of Unison Live Co., Ltd. Miyawaki Motoyasu hints that the cost reduction request of the investor gumi company may have affected Kizuna AI’s “Division”, and there is a “mismatch” between such explanations some doubts have been raised as to whether the description of “Bunjin” is true.

Kizuna AI’s “Division” may be due to “Investor”

Mr. Osaka officially issued the above statement with the signature of Activ8. If the content contains facts that differ from the facts, the company may be required to be accountable.

At the moment, it is a view that does not go out of the scope of “skepticism”, but depending on future trends, it is possible that Activ8 may need to explain again.