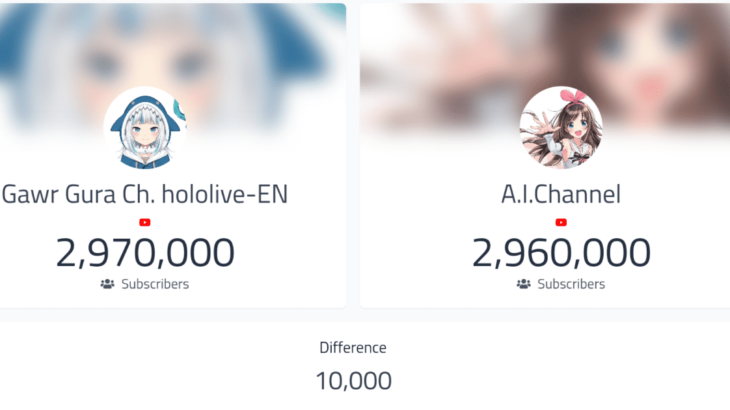 Virtual YouTuber (VTuber) Gawr Gura (affiliation: hololive English) has reached 3 Million YouTube subscribers for the first time in the history of VTuber as of 8:36 on July 4, 2021 (UTC).

Birth of “The Big Shark in the World”

Gawr Gura is a VTuber nicknamed “Same-chan” and “Gura-chan” by Japanese Listeners. On the 39th day after its debut in September 2020, it won 1 million subscribers (equivalent to the YouTube Creator Award Program Gold Creator Award). This is the first record since Kizuna AI in December 2017 and Kaguya Luna in October 2019, and it became the first VTuber with 1 million subscribers in Hololive Production to which the talent belongs.

And this time, it surpassed Kizuna AI and Acquired the Largest Number of Subscribers in VTuber History on June 30, 2021. This is a record of 290 Days (9 Months and 17 Days) from the debut livestreaming, which is an amazing pace of about 5.77 Times that of Kizuna AI.

Also, the first time in history that VTuber, which has only a Live2D Model without a 3DCG model, has the highest number of subscribers.

As a result, Kizuna AI has Fallen from number one for the first time since 2017, when the current VTuber Industry was formed. In addition, the achievement of 3 million sharks marked the end of her era.

“Break Through” The Industry’s Cataclysm has reached a Historic Moment

It is thought that the background of this “Leader Change” is not only the decline of Kizuna AI, but also the rapid expansion of the entire VTuber industry in recent years and the accompanying boom.

Of the 4 people who led the VTuber movement in the early days (Kizuna AI / Kaguya Luna / Mirai Akari / Cyber Girl Siro), Shirakami Fubuki in July 2020 exceeded the number of subscribers to Cyber Girl Siro (affiliation: hololive) was the first in history.

Only a year later, the situation changed drastically. Until then, the number of million talents, which was only two, Kizuna AI and Kaguya Luna, has increased rapidly to 20 (mostly belonging to hololive Production). Support for styles centered on live broadcasting by offices and groups such as hololive Production and NIJISANJI, an increase in the number of corporate and individual talents that are sent to foreigners, and a new coronavirus infection (COVID-19) It is probable that various factors such as the rapid increase in the number of viewers, registrants, and views reflecting the “home demand” accompanying the global expansion of) have led to today’s historic moment.

1 year ago, driving the VTuber movement of the early days, and the talent to defeat the Kizuna AI who has held the number of overwhelming channel registrants that was very difficult for later generations will be extremely difficult. If you say, how much everyone believes? And that is a rookie debuted about 9 months ago.

From the introductory sentence of R-TYPE II “R-9C WARHEAD”

The rapid changes in the VTuber industry for about 3 and a half years have a reality that the actual and experience of the activities and the advantages held and held are not guaranteed to guarantee stability. The retirement and graduation of talents, the outcome of the of agency and group that boasts prosperity until last year, this industry is still in the midst of growth and sticking a reality that nothing is stable It can be said. Attention to the Number of Subscribers of Gawr Gura and Kizuna AI ​is a symbol of “Break Through” that covered the advantages that have built up from the early days of the VTuber industry.

Moreover, this “Break Through” strength does not guarantee future stability. As a result of the player and the aircraft becoming stronger, the stage and enemy characters are also a shooter (Like R-Type series Fighter and Bydo), and further “game changer” is waiting ahead. It may be a surprise newcomer, and it may be a better improvement of the top runner, and it may be from the early days that played again.

Good luck to both Gawr Gura and Kizuna AI. And all VTuber people are further active.

New views since VTuber has been opened … “Historic” Doors were now open.