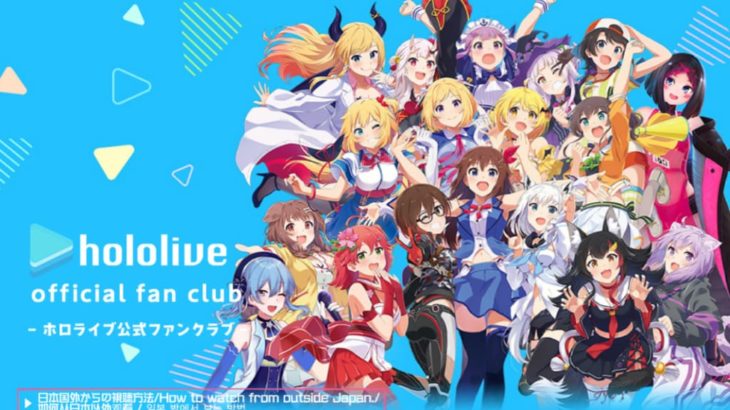 As of February 2020, along with Virtual YouTuber (VTuber) / Virtual Liver Office “NIJISANJI (にじさんじ)” as a leader in the VTuber industry, “hololive Production (hereinafter: hololive) (ホロライブプロダクション)” is attracting attention.

hololive is now at the forefront of NIJISANJI, but in early 2019 it was hard to say that it was as strong as NIJISANJI. After that, he rapidly emerged and made a quick advance until he became a part of the competition with NIJISANJI today. In particular, the breakthrough over the past six months has been remarkable, and the momentum is still “Non-Stop” today.

NIJISANJI and hololive are not offices or groups led by VTuber, once called “Shitenno (四天王)”. However, Today, it has left the “Shitenno” completely behind, and is now leading the VTuber industry without stopping. NIJISANJI is believed to have been driven by the hungry spirit of “Stray Dog Counterattack”, but hololive has also spun various chronicles to this day.

This time, we would like to a look at the trajectory and the future of hololive, which establishes a “Non-Stop Walking” that leads to the slogan “#Non-Stop hololive (#とまらないホロライブ)”.

It Started with “13 Viewers” of “Tokino Sora”

“Tokino Sora (ときのそら)” a symbol of hololive and still at the forefront as a leader, is a “Pioneer” debuted in September 2017.

However, since it did not become popular immediately after debut, it was not selected as the so-called “Shitenno (Kizuna AI, Kaguya Luna, Mirai Akari, Cyber Girl Siro, Uncle YouTuber Nekomasu)”, and will be described later until the “Trigger” came, the shadow was thin.

It’s also a bit of a “Underlay” is hard to imagine from her brilliant appearance today, and the fact her first live broadcast had only 13 viewers is the epitome of her story.

The change in her situation was triggered by the fact a live broadcast at the end of 2017 attracted a large audience, A certain user taught her the story “Don’t Stop…” of the character “Olga Itsuka” of the animation “MOBILE SUIT GUNDAM IRON-BLOODED ORPHANS”.

At this time, the sky returned, “Don’t stop …I Don’t Stop!” However, no one would have expected this would lead to today’s “# Non-Stop hololive” direction.

Today, Hololive’s VTuber style focuses on live broadcast distribution via Live2D, the same as NIJISANJI. It is also common to convert to 3DCG in order from those who have gained a certain degree of popularity.

However, as the series of issues surrounding Kizuna Ai’s “Division” have been highlighted, the trend in today’s VTuber industry is to emphasize the abilities of the performers. In this regard, hololive has been actively adopting VTuber (especially as a newcomer), which has character characteristics with different characteristics from NIJISANJI.

Recently, “Kiryu Coco (桐生ココ)”, which debuted on December 28, 2019, has attracted a lot of attention, and it was received with surprise it collected the largest 44 thousand peoples in the history of solo VTuber live broadcasting (at the time of broadcasting). The unique talk skill attracts people who make use of the bilinguals not found in the conventional VTuber (Cyber Girl Siro can also speak multiple languages, but there are very few places to show and utilize), calling for a different wind, and is also having a huge impact on the activation of the whole hololive.

In today’s VTuber industry, the “YouTube Subscribers” that Kizuna AI and others advertise as being still appealing have been fake (Most disastrous number of recent Kizuna AI videos is true), Conversely, the importance of an index directly shows the latest popularity, such as the “Number of Simultaneous Viewers” in live broadcast distribution, is emphasized. The advantage of old players like Shitenno is no longer in the past, and “Big NewComers” like Kiryu Coco make a debut and set up a monument, aiming for heights has become a daily sight.

hololive has also succeeded in gaining popularity by debuting VTuber, which has a different character from NIJISANJI.

It is based on “Collapsed of Game Club Project, Kizuna AI, and .LIVE IdolClub”, it seems to have gotten profiting while others fight, but before it even came to the point of being comparable to Nijisanji, he made a steady foundation and came to this place, and “Didn’t Stop” I guess it is.

hololive has released the hashtag of “#とまらないホロライブ (#Non-Stop hololive)”, just like the live announcement. With this “Word” as a pillar, we will liven up the days until the day of the live. Its media strategy symbolizes the rapid rise of hololive in late 2019.

After that, “Non-Stop Story” was a great success as previously reported.

“Don’t Stop …”, which was once told to Tokino Sora, is now sublimated into hololive’s “Nonstop Story” and “#Non-Stop hololive”, and continues to illuminate its direction. That weird meeting will seem lucky now.


Here is the sad news. Cover Corporation, operates hololive, is funded by gumi, which was noted for its investment in Activ8, the operator of Kizuna AI, which caused the problem of “Division.”

Game Club Project, Kizuna AI, .LIVE IdolClub … Remember the fantasy that seemed to be safe until a while ago. There is no guarantee hololive or NIJISANJI will be safe in the future. “The situation of an invisible adult” lies on the immediate side, and it is not clear from the outside how the situation is. Sooner or later, the story will eventually come to an end. It would be dangerous to have a special groundless hope there.

But people can learn while repeating mistakes. While many works have disappeared, it has certainly created a long-loved presence… Disney, Doraemon and Hatsune Miku will continue to be loved.

No one knows what will happen in the future. However, as long as we continue to walk in a firm direction, the path will open up.

The one behind hololive’s “Non-Stop Story”. I sincerely hope it will be one of the signposts for those who are disappointed with the reality of the VTuber movement.